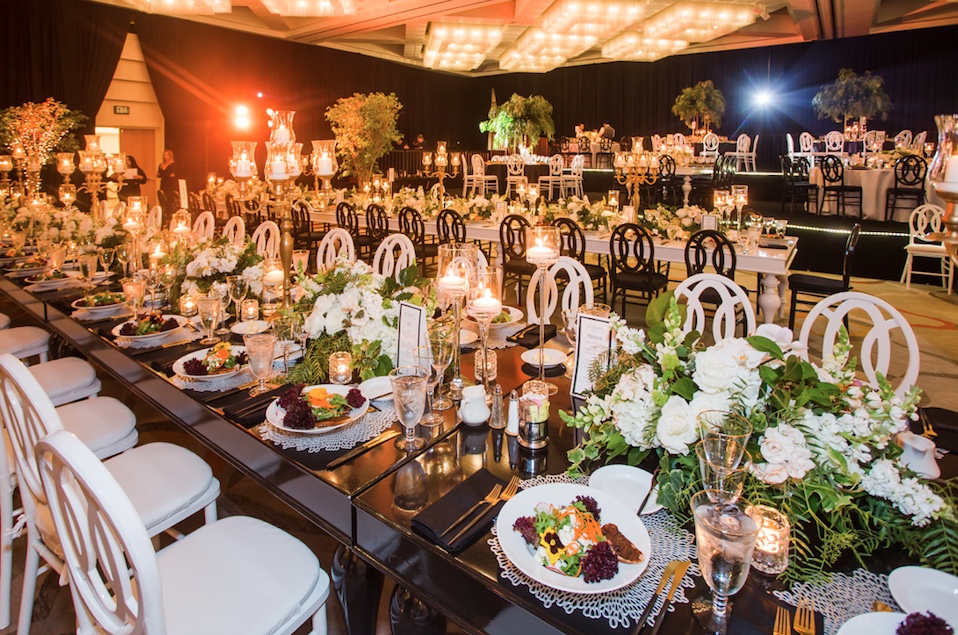 Santa Ana, Calif. (May 1, 2019) – Court Appointed Special Advocates (CASA) of Orange County, held their annual Celebration of Children Black & White Ball, on Saturday, April 27, 2019, at the Hotel Irvine in Irvine, CA. 405 guests were in attendance to support CASA’s mission of serving abused, abandoned, and neglected children in Orange County with a trained and supported volunteer advocate. This year’s Gala had a net of over $1,300,000 and serves as the fifth year in a row that CASA has exceeded in breaking the previous year’s net and becoming the organization’s highest netting fundraiser in their 34 year history. This beautiful and elegant evening was executed by eight longtime CASA supporters who served as this year’s Chairs: Barclay Butera, Dana Chou, Nancy Eaton, Bobbie Howe, Lourdes Nark, Urvashi Patel, Dana Strader and Wendy Tenebaum. Evening festivities were themed “Growing Organically” and guests arrived to a transformed reception area at Hotel Irvine for a cocktail reception featuring a silent auction with 106 silent auction items including 16 “Chef Table” experiences to bid on.

Guests were welcomed into a ballroom that was beautifully transformed by the team at Elite OC Productions. Mark Sanchez, former NFL and USC Quarterback, and CASA-OC supporter, served as this year’s Masters of Ceremonies and helped to provide a lighthearted balance for the evening’s program. Regan Phillips, CASA CEO, offered sobering remarks on the critical importance of CASA’s work for youth in the foster care system – citing that “one in eight American children has suffered a confirmed case of neglect or abuse by age 18”, “there are more than 400,000 children in the foster care in the United States – over 70,000 of which are in California” and that “the total economic impact incurred by the California community for the lifetime costs associated with 71,289 substantiated victims of child maltreatment in 2017 was $19.31 billion”.

In the highlight of the evening’s events, CASA volunteer, Cathy Miner and her CASA kiddo and current foster youth, Ruben, presented the award for Advocate of the Year to La Mirada resident, Michelle Oliveira, for her outstanding work as a CASA volunteer since 2014. Michelle, a self-described “Tiger Mom” to four boys – aged 24, 19, 16, and 14, shared a gut-wrenching story of being matched with her current CASA kiddo that she mentors and advocates on behalf of, “My heart sank as I read about the night Frank entered the system and was transported to Orangewood. He had been living with his Dad, his Mom was unfit to care for him. At nine years old, Frank found his father dead in bed after passing away in his sleep. Throughout the night Frank had stayed by his Dads side, cleaning him and wiping his face. Eventually, someone was alerted and called 911 but it was too late. Once the police realized there was nobody to come be with Frank, a social worker was called to their home. She asked Frank if he understood what had happened to his Dad. Frank reported to her that “dead means when your soul leaves your body and goes to heaven. I know my Dad is not dead because I did not see his soul go to heaven””.

Auctioneer, Zack Krone, and Masters of Ceremonies, Mark Sanchez, revved up the crowd for the annual Fund the Mission which hauled in over $670,000 with donations from the guests ranging from $100,000 to $500. The live auction included a Dream Vacation Home Experience at the Villa Verai in Phuket, Thailand, donated by Twila True, which fetched a $37,500 donation. One lucky $15,000 bidder was able to choose from one of four jewelry pieces offered by Twila True, a Diamond Sponsor and exclusive Jewelry Sponsor for this year’s gala. Following the live auction guests headed to the dance floor to continue the party and celebrate the evening’s success with a concert performance by The Side Deal, an Orange County based band comprised of members of Sugar Ray and Train. Mark Sanchez joined the band for their first song, playing his guitar to the Sugar Ray classic, “Every Morning”.

Court Appointed Special Advocates of Orange County is a privately-funded non-profit organization that serves severely abused, neglected and abandoned children through the recruitment, training and continued support of volunteers who advocate and mentor these children, representing their best interest in the courtroom and other settings. Founded in 1985, with major support from the Junior League of Orange County, we serve annually approximately 700 of the children who move through our court system as a direct cause of abuse and neglect. We are able to serve these children through the generous support of those who donate to CASA as well as the immeasurable compassion and commitment of our CASA advocates. At CASA of Orange County, our mantra is I am for the Child. Learn more about the ways to give to CASA as a means to help us support and protect the rights of our county’s valued children and to give them the nurturing and stability that they deserve. Please visit www.casaoc.org to learn more.


This website was donated by our friends at Rogue Creative Development